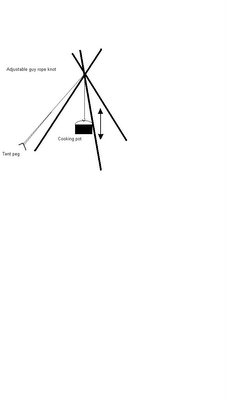 I invented something, I’m dead pleased best of all it works! I have invented things in the past, mostly excuses, but none of them worked, at least not for long. I wouldn’t be surprised if someone else invented the same thing before so it might turn out that I’m not an inventor but more of a re-discoverer but nevertheless I’m rather happy with my work.

I am now the proud owner / creator of a fire with temperature control.

First make a tripod out of three four foot lengths of hazel and tying them together with an old boot lace about three foot along the length. Open the tripod out and put it over the fire so that any thing dangled from the middle of the tripod would dangle over / into the fire.

Stick a tent peg into the ground about a hand’s width out from one of the hazel branches. Take a length of paracord and attach a hook or tie a loop in one end. Tie the other end to the tent peg but, and this is what I call the clever bit, use one of those knots that get used for tying guy ropes. This Knot is adjustable so when the end of the cord with the hook / loop is dangled over the fire with a cooking pot hanging from it the pot can be lowered or raised with very little effort.
Words and stuff by Hugh Sawyer at 15:30

for the curious, I'd guess it's a tautline hitch.