I have made my first foray into living in the Alps, work took me to Italy on Monday which was rather fortunate as I had Tuesday and Wednesday off work. At the first opportunity (after lunch) on Tuesday I drove up into the mountains, hairpin bend after hairpin bend till the road narrowed to the width of the car and there was not a soul to see. From there I grabbed my pack continued my climb on foot, I`m sure that it was not the novelty of exertion and the accompanying shortness of breath that made me decide on a camping spot quite so close to the car, rather I expect it was the realisation that I was already in the middle of nowhere so there was no point to go further. Anyway it was about to rain so there was a necessity to stick up a shelter pretty quick, there is no point walking about in the rain when you could be sitting down in the dry drinking tea. Ground flat enough to sleep on is a resource I have found the world is sadly lacking in when searching for places to sleep in woodland and beaches all over the world. I have to report that the Alps are less well endowed with this precious commodity than any other place I have yet been. Ground so steep that the use of hands as well as feet is required to propel the walker is not in short supply, as is sheer drops, raging torrents and vast arrays of jaggedly uncomfortable rocks sticking out at all angles. Eventually a patch of flat ground large enough to hold a grown, albeit contorted awkwardly around a couple of large rocks, man. There was even a couple of handy trees to attach my basha (waterproof sheet) to, happy days.

I was pleased to discover that I remembered how to put the thing up and then less pleased to find I am no where near as good at lighting a fire as I used to be but I did get it lit. I was pleased to be nice and close to a raging torrent to fill a pan with water to make tea but less pleased to discover that I had forgotten to pack a mug and would thus be drinking from the saucepan. I was pleased to be sitting in the basha drinking tea when the lightening and the rain started but less pleased to discover that I had not, as previously assumed, remembered how to put the thing up properly and would thus be going out in the rain to do it properly. Having fixed the basha I then contented myself with sitting under a small waterproof sheet on the side of a mountain in a thunder storm and questioning what I was doing. Had I not had a nice hot saucepan of tea to drink I might well have let such questions bring doubt to my mind about the wisdom of my choice to live in the hills for a year. Fortunately PG Tips was at my side and doubt had been swept much like the road had been where I had been forced to abandon the car, whether the work of an avalanche or flash flood I could not tell for sure.

I did not sleep well that night, I do not recommend sleeping with a rock where your head should be and another where your legs go, it leaves precious space for comfort. However, being awake for most of the night did ensure that I didn`t let the fire go out in the night so it was easy enough to make tea in the morning and by this point I had an empty pasta sauce jar to use as a mug. Verily I was living like a king.

After breakfast I moved further up the hill and this is the shelter I built. 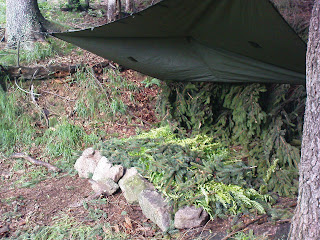 I managed to find a flat bit of ground hiding under a spruce tree that had been torn from the ground by some fierce act of nature, having dragged the tree aside and put the basha up I trimmed loads of small branches off to make a bed from. I was pleased with the result of my labours right up until the third hour of not being able to sleep, it was a lot less comfortable than it looks. 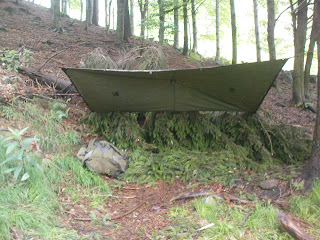 Having built the basha and drunk a restoring jar of tea I had a bit of a stroll about the place and was mightily pleased to discover a silver birch tree that had been recently uprooted and tossed down the mountain, no doubt in the same action that did for the spruce tree and the road. Birch bark is the best thing I know of for lighting fires and I always welcome the chance to top up my supply when it comes along. It turned out though that this tree would provide me with more than kindling. The tree was so fresh that I soon realised that I would be able to remove sheets of bark and that could be used for making tiles for a roof. I had never tried this before and the first couple of attempts didn`t work so well, leaving me with just strips of bark but soon I had the hang of it. 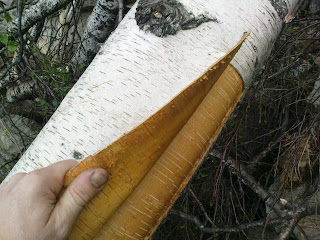 Once you have got to this stage peel back slowly and evenly. 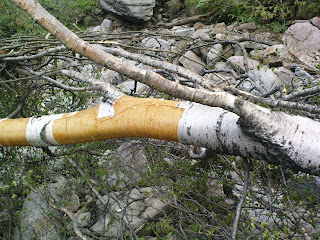 Having collected the bark I wasn`t sure what to do next so I rolled it out flat and put it in the river to soak, using rocks to hold it flat and stop it from being swept away, I figured that it needed to be kept moist so I could work with it. Annoyingly it dried out somewhat on the way back to Switzerland and started to curl up at the edges so I have blocked the plug in my shower tray and weighed the bark down with jars of jam and saucepans fill of water and am soaking the bark in the hope it will become pliable again. I like the idea of building a shelter tiled with birch bark, it would be reasonably waterproof, beautiful to look at and highly flammable, what more could I ask for?
Aside from falling on some rocks and dislocating my shoulder again the two days were a great success, it was great to be out in the woods again, it felt like being home again. I`m looking forward to starting for real, in the mean time I`m going to be working and keeping an eye out for more birch trees. I will be moved out to the woods within a week.

Hiya Hugh - looking foward to reading more of your outdoorsy shennanigans once more .Congrats on getting hitched .

Will send some sponsership at some point funds permitting .

May The Flying Spaghgetti Monster watch over you and yours .