For most of the summer it had felt as though I have been playing at this woodland living thing. My girlfriend has been staying in my studio on Verbier, the sun has shone and life has been easy. This week I helped the girlfriend move into her apartment in another ski resort where she will be working for a year. Save for the holidays I will only see her at weekends when she comes to stay at "base camp". For me this moment has always been the time when this venture stops being a game and I fully turn my attention to surviving for the winter.

Tonight I am sitting in the shelter assessing what needs to be done. Number one on the list is to find a quick way to make tea. Lighting a fire can be a bit long winded even at the moment, it has been raining so all the wood is wet and I can imagine it taking longer still when I have to fund my firewood under a meter of snow. When it is cold not only will it be harder to light a fire but it will be more important to have a nice warm drink. I will keep using a fire as it is a quintessential part of the woodland experience and handy for keeping warm by. I am a little concerned about using a fire on the shelter as it is built out of things that are very flammable, in fact the only non flammable thing on here is me. I do have a rather groovy paraffin lamp that Mrs Ditch Monkey got me as a house warming present. I have been planning as using it as a heater once there is enough snow to build walls. I got the idea from watching an Inuit heat his igloo with a lamp fired on seal blubber. Apparently such a lamp gives off enough heat to keep the temperature at around freezing point, toasty. Tonight I am giving the theory a test run, having only one wall and thus being exposed on three sides I am not expecting to be warmed by the single flame. I have set the lamp between some rocks and there, where it is sheltered from the breeze, the air is quite warm. The real test has been to make a cup of tea over the flame, if it makes tea then I will want for nothing. The water has been over the flame for a little over an hour and fifteen minutes now, and the water is still only warm. I have been thinking of using a thing called a jet boil, it boils half a litre of water in 90 seconds which is handy but the last one I owned fell apart after a couple of months use, I think I'll have to get one and save it for emergency use only.

I gave up on the lamp as a stove and cooked over a heximine block instead. Tortellini with a stock cube thrown into the water, this flavours the pasta and creates a nutritious drink at the same time - maximum efficiency and minimum requirement for culinary dexterity. So here is something I made for the long suffering Mrs Ditch Monkey the other day, you can try it at home. 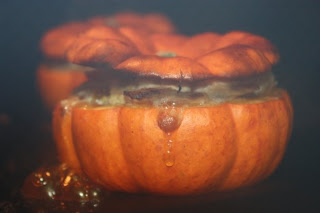 I bought a couple of mini pumpkins to make this with but you could use any size pumpkin.

Chop the top off the pumpkin, cut the insides out and put the seeds and all the gubins attached to them to one side. Well, either throw them away or sprinkle them with salt and bake them with the pumpkins to make a nice snack.

Chop up the pumpkin flesh you removed like so 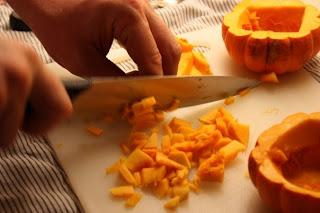 Chop up a small onion and crush a medium sized garlic clove.

Toast a handful of flaked almonds by putting them into a hot dry frying pan and keep moving them about until they go brown. Then tip the nuts out into a bowl, add some olive oil to the pan and return to the heat. Put the onion and garlic into the pan and cook for a couple of minutes before adding in the chopped pumpkin. Sweat the pumpkin down for about three or four minutes then add enough ricotta to make the amount of stuff in the pan fill the hole in the pumpkin(s). Stir it around for a bit, add salt and pepper to taste. You could always add a sniff of cinnamon at this point if you liked. Meanwhile put a large basil leaf into each pumpkin then stuff with the ricotta mix. Put the pumpkin lids back on. Bung em in an oven heated to 180 degrees C until cooked. About 20 minutes for a small one.

Whilst they were cooking I made a fresh tomato sauce by chopping some tomatoes into small bits and letting them cook down with some olive oil, salt and pepper, then adding some basil leaves for the last five minutes of cooking time. Serve with crusty bread, your fave drink and good company.