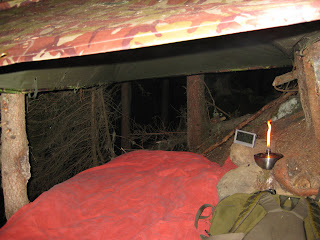 It may not come as a complete surprise to learn that night after night of not sleeping properly is gets tiresome after a while. By yesterday afternoon I was walking about like a zombie, the idea of another night of waking up ever hour or two with no feelings in my arms, and having to shake the life back into them. I decided that I had had enough of sleeping in all my clothes and a one piece ski suit, something had to give. I left the ski suit and extra fleeces at home last night and opted instead to bring a duvet up to the forest. Wow. I slept like a baby. So now I'm considering whether it is worth spending a couple of hundred pounds on an arctic sleeping bag or if I can get away with a nice thick duvet.

One thing that being warm made me realise was that my bed has become uncomfortable. The thick layers of moss that I lay down on branches has compacted and now follows the contours of the branches. This afternoon I'm going to take the bed apart and rebuild it so it has a flatter base on which to lay the moss. I'm also going to puzzle over how best to build a roof that will hold the weight of lots of snow, I know it should be relatively straight forward but the geography of the place is throwing up some difficulties.
Words and stuff by Hugh Sawyer at 12:23

Maybe it's more cost effective to buy a second duvet and sew them together?

Hello my old mate - I've been thinking about you lately, ahhh. It's nice to see you are still doing your thing - I don't think I will be able to get any Jam to you this time, sorry. Be careful, keep warm - I hope you have lots of firewood stacked around your shelter!