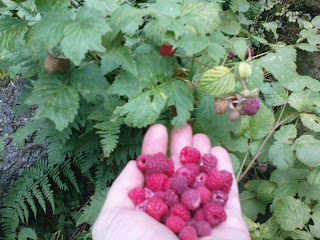 As I may have previously mentioned, the woods are not a hugely comfortable place to sleep. I have been putting up with discomfort on the basis that it was probably a good idea to toughen myself up a little before the onset of winter. A couple of days ago I took an executive decision, decided I was not tough enough and set about making a comfortable bed. To my mind, a bed needs to be flat, soft and warm. I am only aware of these required attributes on account of having been trying to sleep without them. The first challenge that I faced was to build a flat platform for the bed. Flattening the ground with a shovel was out of the question on account of the rock sticking out that, on closer inspection, turned out to be the tip of the iceberg. A wooden frame built around the rock and over the dips in the ground would create a flat surface. So I scouted around looking for some long strong straight bits of wood, only to discover that I had used all the local examples of such in making the roof. It took a lot less time to take the roof down than it had to put it up and soon I had a rough frame for the bed laid out on the ground and propped up at one end with a rock. 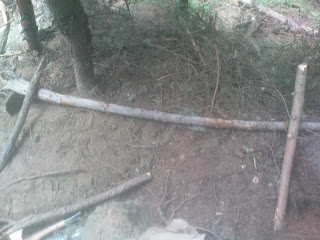 Next, I lay lots of sticks on top (see photo below), followed by some spruce bows, of which I forgot to take a photograph. I only took bows from a tree that had already fallen down as I thought chopping trees down wasn’t in keeping with the whole ethos of the venture. So I was left with a bed that was essentially a pile of sticks with some thinner sticks on top. It was not very soft. 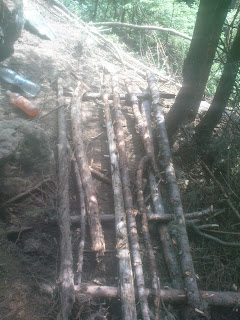 I knew that one of the three vital attributes of a fully functioning bed was softness; I was going to have to find some. I figured that spruce bows layed thickly enough would create a reaasonable level of softness. I would need to find another recently fallen tree. As I walked around the forest, I noticed the ground beneath my feet was all springy and soft. It turned out I was standing on a big rock that was covered in a thick layer of moss, and furthermore that that layer of moss peeled away really easily. So, within half an hour I had a thick layer of moss covering the bed. It was time for a test run. I tentatively lay down, half expecting the entire structure to collapse, pitching me down the mountain side. But it held firm and remarkably it turned out to be flat on the first build, though perhaps a little lumpy. This was nothing a little re-organising of moss wouldn’t sort out. Best of all the moss is soft enough to be a pleasure to lie on. The whole structure also acts as fantastic insulation from the ground so that, for the moment at least, I’m nice and warm at night in only my summer sleeping bag. 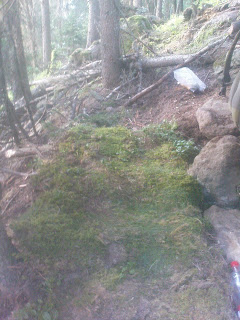 There was a massive thunder storm last night and you may recall that I took the roof down to make the bed. I discovered that a properly functioning bed has four attributes; the fourth being dryness.

Good luck in this interesting and brave venture.

It is beginning to look vaguely civilised. Leave some chance of suffering later, or what are we all going to read about from the comfort of our armchairs?

I'll send the sun lounger and space heater back to the shop then.

but i have some doubt that either you will complete it or not..Let's see..