It's -15 degrees centigrade tonight. It's going to be tough.

Fortunately I now have snow shoes so getting up the hill should be easier.
Words and stuff by Hugh Sawyer at 22:50 2 comments:

It's actually quite cold up there.

I slept in the "igloo", that's right the one without the roof. Very very cold and not very happy. That's probably the best way to describe monday night in the woods. Not that it actually was very very cold, it was only about - 8 degrees centigrade, and that is comparatively mild. Later in the week it's due to be - 20 or even -25.
The worst bit about the morning was getting out of the sleeping bag, it was even colder outside the bag than in, the next worse bit was putting on cold shoes and trying to get frozen toothpaste out of the tube. Putting the kettle on for a cup of tea was the highpoint, closely followed by realising I could thaw my Nutella sandwich out by putting it in the inside pocket of my coat. The chocolate was still frozen by the time I ran out of patience but I still felt quite resourceful. I managed to get another layer of blocks onto the igloo but it was so cold that the snow was still very glassy and so the blocks didn't stick together. I'm going to let them melt a little during the day and then freeze together when the temperature drops before adding the next layer.
Words and stuff by Hugh Sawyer at 20:34 No comments:

I spent the first night up the mountain last night and it was not too bad. The weather is quite warm at the moment and it was a clear moonlit night so the journey up the hill wasn't too challenging. Rather than taking a short cut through the woods, which involves trudging through waist deep snow, traversing cliff tops and a lot of climbing, I took the long way along a foot path. Unfortunately the path was like just a sheet of ice, people have been skiing down it and the snow has been melting in the sun during the day then freezing at night. It was like walking on an ice rink. A very steep ice rink, fortunately I was wearing snowboard boots which don't have the best grip and my centre of gravity was somewhere up around my shoulders because of the massive rucksack I was carrying. Nevertheless I got up the hill without falling, often, and then made it to my new home with very little in the way of traumas.

I was quite pleased to find that all the ice had melted from the bed I had previously made from branches and moss. It was such a nice night; I’m guessing around 0 degrees centigrade, that I just got into my sleeping bag under the stars. I didn’t sleep so well, first the moonlight kept me awake, and then it was hard to get comfortable sleeping on a hard lumpy bed. Eventually I did get to sleep and was only woken up whenever I rolled on to my injured shoulder. By the small hours the temperature had dropped to about, I guess, -8 so I would occasionally wake from the cold.

This morning was fantastic, I got up, had a frozen cheese sandwich and some cold tea for breakfast and then, having decided in the night that I didn’t like where I was sleeping so decided to move house. Or rather I found a flat bit of ground and attempted to make an igloo on it. I’ve never made an igloo before, it turns out that there is a bit of a knack to it. I didn’t start working out what this knack is until I was about half way through so as a result the base level is not as strong as the top. I think I’ll sleep outside again tonight and see if the “igloo” is still standing in the morning.

Things have changed, as they often do, and so I'm moving into the snow this monday the 17th rather than having to wait until the 22nd. I have gathered up most of the equipment that I need, and am now just lacking snowshoes, something warm to lie on and things like that. I have been reunited with my trusty basher so there will be some form of roof in my life, I wasn't overly keen on being woken up by snow falling on my face.
This week I have been training hard for the upcoming challenge; I've been getting plenty of sleep and putting on as much weight as possible. So yes, my training regime has consisted of sitting on the sofa and eating cakes. All that comes to an end on Monday though so if you'll excuse me I must get back to my training. All this typing is using up valuable calories.
Words and stuff by Hugh Sawyer at 11:21 No comments:

I'm going to be moving into the snowdrift on january 22nd. It would have been earlier but there are various demands on my time that prevent this happening.
Words and stuff by Hugh Sawyer at 11:12 No comments: 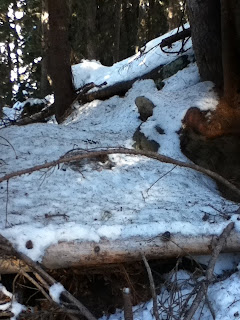 So this is the bed that I made back last summer, looks comfortable huh? The walk up to it was through knee deep / waist deep snow and took an hour and a half. Judging by the amount of snow on the bed I have chosen a reasonably sheltered spot. The big problem is that I don't have a spare 90 minutes every night to walk up the mountain so I think I'll have to buy some snow shoes to speed my journey over the snow.
Words and stuff by Hugh Sawyer at 21:35 No comments:

First night in the snow 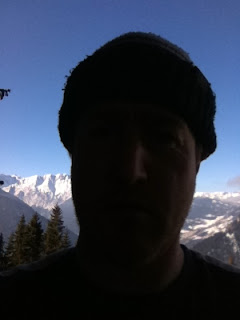 Went up the hill last night to test drive my new sleeping bag in a "worst case scenario". So I took the sleeping bag, some warm clothes, a flask of tea and a blanket and went off to look for a patch of flat ground to sleep on. Having walked up hill for about 20 minutes I found a flat patch of snow, lay the blanket on it, put the sleeping bag on that and went to bed. Sure enough my body heat melted the snow which soaked the matress and then the sleeping bag so that kept me awake a bit, as did the snow falling on my face. However, I slept much better then imagined and got up feeling refreshed and keen to get on with the day, well keen to go home and have a shower and some scrambled eggs.

Conclusion, with some form of insulating layer to protect me from loosing body heat to the ground and something waterproof living in the snow in the alps in the winter should be possible.

Next step - get more kit and start building a shelter out of snow.